SCSC 2012 Panoramic view of the start of race 4 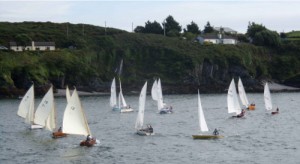 No times given as the Pico retired and thus the order of the race was as they crossed.

Wind: F1-2
Course: Flea – Castlehaven – Cosheen – Flea – Castlehaven – Cosheen
After two false starts caused by five and then four boats over the line, the sailors were threatened with disqualification were they to be over the start line on the third attempt. Immediately after the start there was a starboard incident which resulted in Pirouette incurring a 720 penalty. Nonetheless, Pirouette was able to catch up with the fleet by the first mark and commanded a solid lead thereafter. The course was shortened to exclude a second visit to the Flea, Castlehaven and Cosheen marks due to a lack of wind.

Wind: F2-3
Mini course: Col-H-Coosheen-Col-H
Opi: Col-CH-H
The wind reverted to the prevailing south westerly breeze strengthening throughout the race. It provided a challenge for all but the experiences of the previous days demonstrated their new confidence. William Wallis having won the Optimist series switched to the Topper, the Tchens having had to leave and miss the final race. Cian and Shane Buckley normally sailing in the Pico split up so that the latter could sail the Topper.
Result:
Mini
1. Pico – C Buckley
2. Topper – S McKennedy
3. Topper – S Buckley
4. Topper – W Wallis
Opi
1. T Cochrane
2. Z Thompson
3. O Toogood